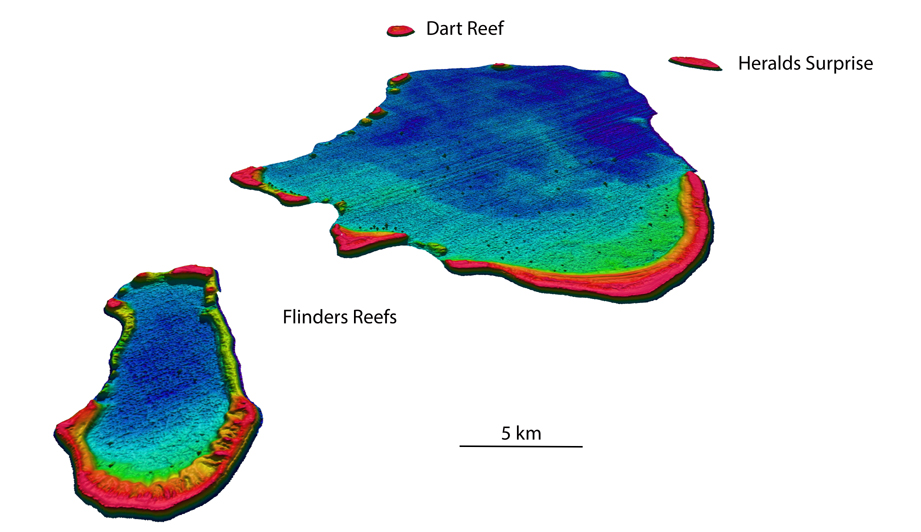 Dr Robin Beaman, from JCU’s College of Science, Technology and Engineering, said mapping the reefs and their underwater landscape had always been a challenge, because their remote locations and shallow nature made it difficult to use modern surveying techniques, such as vessel-mounted echo sounders.

Instead, Dr Beaman worked with the German Earth observation company EOMAP and used satellite imagery to develop 3D bathymetry (or depth) data over a large group of Coral Sea reefs.

“These reefs lie in clear, sunlit waters, so the Landsat8 images were able to provide high-resolution data to a depth of about 50 metres,” he said.

“By refining the satellite data and merging it with existing data, I’ve produced 3D depth maps for these reefs and atolls. That gives us a much more detailed picture than was previously available.”

The project focussed on the reefs and atolls within those waters of the Coral Sea that fall within Australia’s Exclusive Economic Zone, also called the Coral Sea marine Reserve.

While many of the largest reefs had been progressively mapped by the Royal Australian Navy using their LADS airborne lidar bathymetry system, there were still large areas of shallow reefs with no detailed depth data over them.

“The Flinders Reefs, about 230km offshore from Townsville, were an ideal place to start, being close to the Australian mainland and lacking an accurate 3D map,” Dr Beaman said.

“These are atolls that grew upwards from tilted continental blocks created when Gondwana was breaking up. The 3D images we now have of North and South Flinders Reefs are really stunning, showing classic atoll shapes with a shallow coral rim around a deeper lagoon.

“With this new 3D information we can now better predict where coral diversity is located around the edge of these reefs, because we know where we’re likely to find the shallow and deeper coral communities,” he said.

“That information will help marine researchers to plan future scientific expeditions, and it will help managers of the various conservation zones determine what other marine life they can expect to find there.”

Dr Beaman hopes the maps will be a valuable resource in the ongoing discussion as to what levels of protection should be given to different areas of the Coral Sea Marine Reserve.

More broadly, oceanographers could use the 3D data to more accurately model how oceanic currents move over and past these reefs before reaching the Great Barrier Reef.