Currently, algae are being considered as one of the possible causes of the massive fish kill in the Oder River. With frequent and precise satellite measurement data available, researchers at EOMAP were able to narrow down the course of the algae bloom in terms of time and location. According to the Helmholtz Center for Environmental Research-UFZ, this is another important piece of the puzzle in clarifying the causal effect chains of the environmental catastrophe. 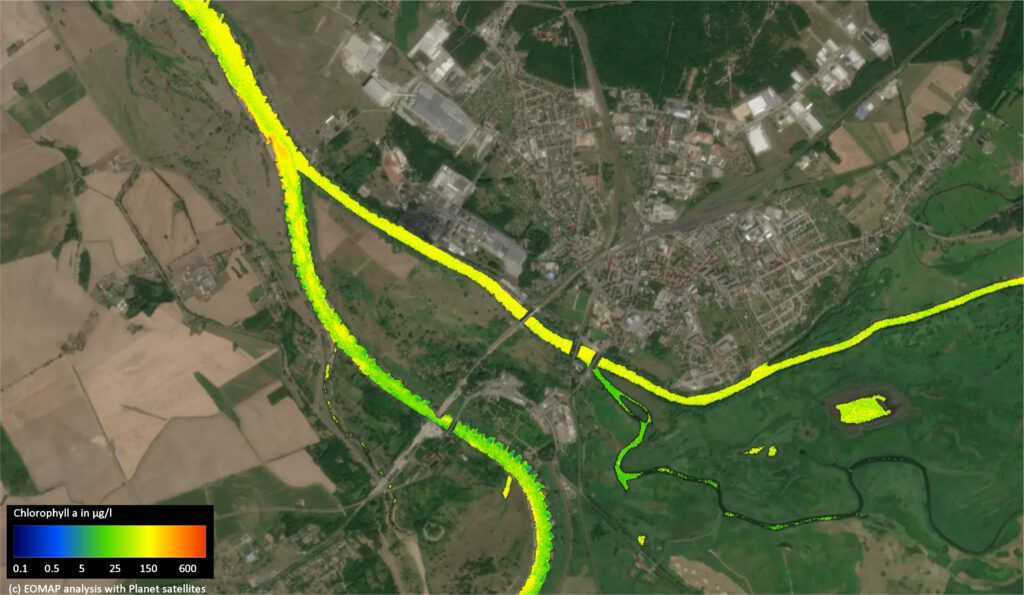 In order to clean up the fish kill in the Oder River, high-resolution satellite data reveal new details, such as the algae contribution from the tributaries. The image shows the inflow of the Warthe (right) at August 3 2022, carrying markedly higher algae concentrations increasing the algal level in the Oder below significantly. c/ EOMAP / Planet

Three-to-five-meter Dove satellites image the entire Earth’s landmass each day, providing a more frequent capture than Sentinel-2 used so far. The 3m resolution allows for a much higher level of detail that was particularly relevant to assess the narrower river areas of the Oder. Paired with the European Sentinel data, the detailed course of the algae bloom from Lipki to the mouth of the Oder River has now been determined. Thus, the team of EOMAP, German specialist for satellite-based environmental data of water bodies, was able to show the following on eight river sections between Lipki (Poland) and the Szczecin Lagoon (Germany): “The algal bloom’s greatest extent was – depending on the river section – already between August 4 and 7, much earlier than previously thought. A previous algal spill at a lower intensity was already visible around July 24  15 km south of Wroclaw but then increased to double its extent around August 3 near Glogow,” reports Dr. Thomas Heege, CEO of EOMAP. (see image)

“Planet’s daily satellite images were able to show for the first time, in great accuracy, where and how quickly chlorophyll concentrations and other water quality parameters developed downstream of the Oder River over this summer,” said Dr. Marcus Apel, Director of Business Development at Planet.  “We look forward to providing data to partners in support of cleaning up this environmental disaster as quickly as possible.”

“Just like forensics we are investigating causal chains leading the kills of aquatic life. These highly resolved satellite data enable us to have a completely new – synoptic – view on the whole course of the river. Thus, they will be the backbone of further analysis of relevant water quality and hydro-ecological parameter sets“, explained Professor Dietrich Borchardt, Head of the Research Unit “Water Resources and Environment” of Helmholtz Centre for Environmental Research – UFZ  (Germany).

“The new, high-resolution observation data not only enable us to fill the gaps of in-situ measurements, they also allow us to reconstruct the whole catastrophe although all water has already been gone into the sea and cannot be sampled anymore. A general advance from the high-resolution is the observation of small water bodies like tributaries or tailing ponds, which is key for tracing the causes“, added Dr. Karsten Rinke, Head of the Department of Lake Research at UFZ.

EOMAP has already worked with some environmental agencies to develop and put into operation an online visualization and early warning system for water bodies.

Notes to the editor:
Satellites detect reflected electromagnetic energy that the human eye cannot see. This is particularly tricky in the case of water, which reflects much of the light. Via bands of green and red light researchers can detect chlorophyll, the chemical plants use for photosynthesis.

You are welcome to download the full text PDF here. Here is the German version that has been published on 1 September, 2022.
And here’s a link to the satellite image, time series and graphs. Please respect the copyrights and captions indicated. – Thank you.

Development of the algae bloom at several sections of the Oder River between Lipki (Poland) and Szczecin Lagoon (Germany). c/ EOMAP / Sentinel / Planet

Spatio-temporal dynamics of the algae bloom along the Oder River between Lipki and Frankfurt/Oder. It clearly visualizes an early bloom near Lipki and  its subsequent increase at Glogow as per August 3rd and further flow downstream until Frankfurt.  c/ EOMAP / Planet