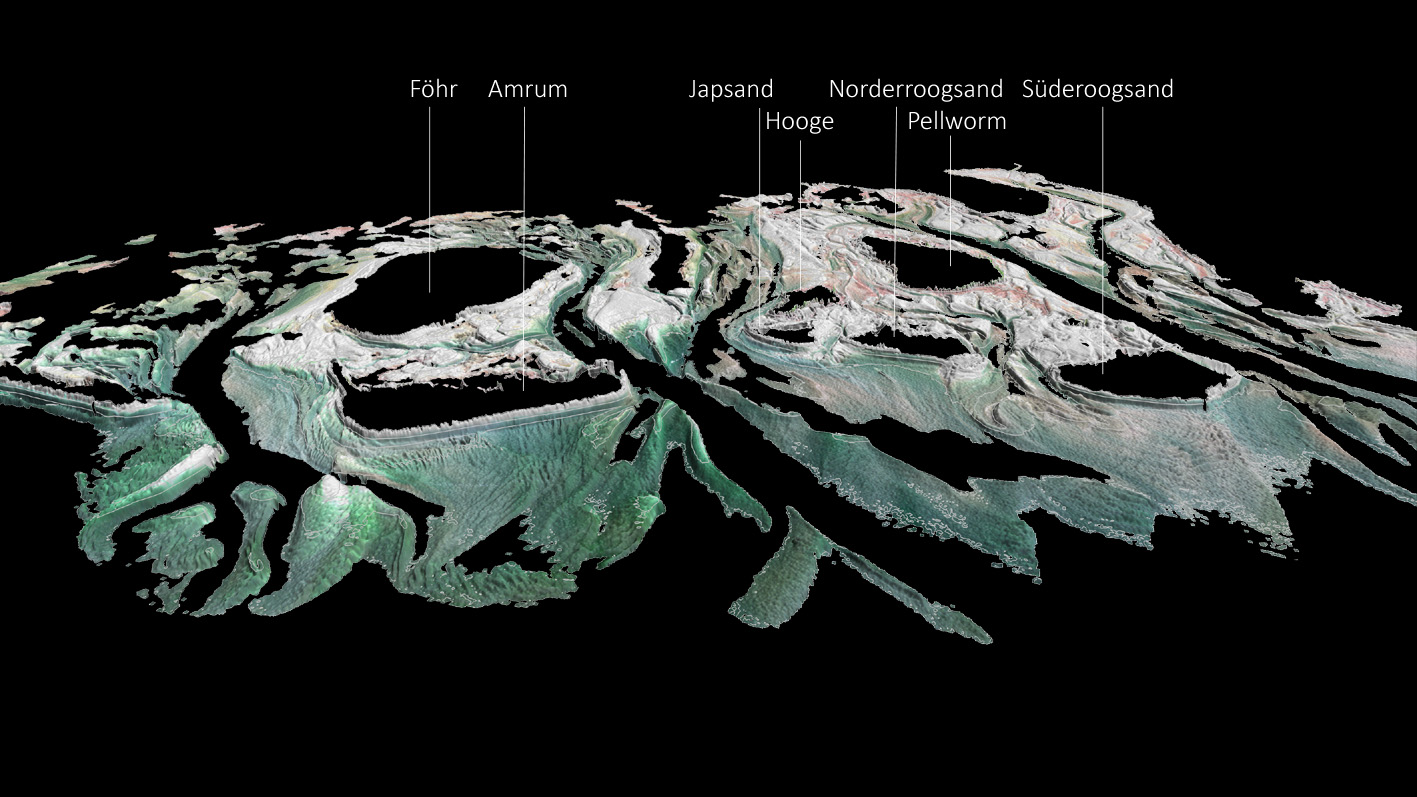 It is based on the concept of using the reflectance inten­sity of different wavelengths (colours) of the sunlight which is recorded by the satellitesensor. This information in combination with relevant databases and physical modelsdetermines the shallow water depth down to the light penetration depth. In the lastdecade, there has been an increasing interest of SDB methods and derived data. Vari­ous exercises have been done by academia and industry to validate and evaluate SDB data sets (REF). This awareness is based on two major developments: the recent availa­bility of very high resolution satellite data mapping the seafloor in sufficient detail and the design of robust and standardised algorithms and workflows.

Fig. 1: Maximum light pen-etration depth of sunlight highlighted for the Baltic Sea (Denmark) using very high-resolution WorldView-2 satellite image data. The colours represent the different wave-lengths of the sensor (colours) which are overlaid by 5 m and 10 m depth contours of the nautical chart. With increasing depth seafloor reflectance is dominated by shorter wavelengths. In organic rich waters such as the Baltic Sea the green wavelength(s) penetrate deepest.

The demand of ac­cessing bathymetric data for the shallow water zone, costs and the ability to map with ship and airborne sensors have also led to high interest in this effective surveying tool.
The zone is still poorly surveyed for various lo­cations worldwide (IHO2016a). This article pro­vides an overview of all aspects of SDB surveys from satellite sources, SDB workflows and methods to use cases.

Depending on the spatial resolution/pixel size of the satellite images they are typically classified in very high resolution (<2 m spatial resolution), high (<10 m), moderate (better than 100 m) and coarse (several hundred metres) data sets. Only the first three are typically of interest for shallow-water bathymetric mapping. Imaging satellite data re-corded every place on earth in high frequency and archive the image data. We can now look back to an archive of about 15 years for very high-resolution data and almost 40 years of moderate resolution data sets which allows not only mapping of most recent condition but also the change over time. Satellite data coverage is not equally distributed around the globe and ranges from few data sets (e.g. remote places in the higher latitudes) to several hundreds to thousands of data sets (e.g.urban areas).
To read on, please follow this link, https://www.dhyg.de/images/hn_ausgaben/HN108_web.pdf.
The featured image shows comparison of acoustic and LiDAR bathymetric data sets and a satellite-derived bathymetric grid for the German Wadden Sea area. It shows the validity and relatively deep mapping potential of the Wadden Sea area as well as the ability to identify movements of seabed topography.